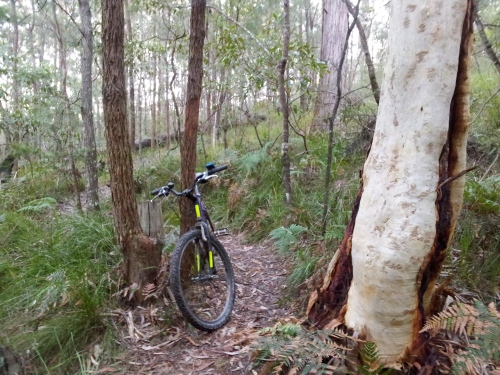 Great way to start the day

The Adventure Race Australia is only 11 days away and our team is definitely under-prepared for the race. So it’s a good thing we have only entered for fun. While my trail running skills are fine and my MTB skills rudimentary, it’s been a long time since I paddled a kayak or used a compass. And I’m the most experienced of our two-person team. Having said that, I expect the event has attracted other inexperienced adventure racers who are similarly under-prepared for it. At least I am fit enough to keep moving for the whole 6 hours we are likely to be on the course, as is my team mate.

With the Byron Bay Triathlon only 3 days away it was a difficult choice this morning: to ride my road bike or my MTB. I decided on the latter. Partly due to the upcoming adventure race and partly because I find it more enjoyable to cruise through the bush than along busy roads.

My ride turned out to be a great way to start my day. I rode some narrow single track through a range of forest types, including open forest and closed in swamp land. I tackled some challenging hills, both on the single track and fire trail, and managed to ride further up each of them than I had before. I still lack the ability to cross fallen logs without walking and wonder whether it would be easier if I had front suspension on my bike and clipless pedals. But then, only a poor tradesman blames his tools so I will just admit it’s a lack of skill and raise myself slightly above the level of ‘poor’.

I rode for 50 minutes with my heart rate in the tempo zone, bumping it up to intense on some of the more challenging hill climbs. My only company on the trails were the swamp wallabies (a small dark brown marsupial best described as a small kangaroo), birds and spiders (one bit me on my neck this morning but it mustn’t have been venomous because I’ve not had any reactions).