Early morning quiet before a fantastic day out

I’ve been looking forward to the Tre-X Off-Road Duathlon for weeks and it certainly didn’t disappoint. Everything about the event was first class; from the friendly In2Adventure organisers who greeted us at registration to the course.

My bike set up in transition pre-race

I turned up to the race early so got a good spot in transition. I left my hydropack on my bike so that I could have hands-free water during the 20km mountain bike leg. The bike didn’t stay that clean for long.

The course was clearly signed

I entered the long course event, which started with a 6km trail run. All the age-group men started together in the 9:33am wave. There was a lot of mud on the first corner of the course and we all tried to avoid it, jumping from side-to-side to keep our feet clean and dry. Looking back, it is almost comical to think about it because we all knew the course was going to be muddy but still tried in vain to start out staying clean.

We had our first water crossing about 300m into the run. Some people tried to jump the water or run around the edges but I just plunged straight in. The whole run course was a combination of mud and water. Early in the first lap I lost my shoe to mud suction, which caused a volley of laughter from the runners behind me when I went back to collect it. Not long after the suction mud we had to run about 300m through a thigh-deep creek of icy cold water. It was terrific.

I don’t yet know my time for the first 6km run but I won’t be surprised if it’s relatively slow given the course. In addition to lengthy sections of suction mud and water, we also had to run along slippery mud sections and up heart-break hill, which was long and slippery. There were a few slippery corners where people fell over, making me think of skittles being hit by a bowling ball. We had to complete two laps of the 3km circuit so we had to go through each challenge twice in the first run leg.

The 18km bike leg was made up of two tough 9km circuits. The first section of the bike leg lulled me into a false sense of security as we rode along relatively flat double wheel tracks. That didn’t last long; within no time I was struggling down a steep, winding and bouncy single track. Without suspension I really rattled around and my arms got a good workout. Things just got tougher when the track started to climb back up to the top of the double vehicle track, switching back on itself repeatedly. I had to walk a lot of the climb because it was too steep for my skills.

Up on the double vehicle track I flew along again, throwing caution to the wind as I descended the trail. I soon found myself back on tough muddy sections of single track that took all the concentration I could muster. I was starting to feel the first signs of fuel deficiency so sucked down a Hammer Nutrition gel we’d been given by the race directors. While it didn’t hit me as hard as the PowerBar gels do, it tasted good and seemed to be just enough to get me through the rest of the race.

Like the run course, the bike course had a heavy dose of mud and creek crossings. There were a few thrills and spills around the course, mostly innocuous.

I fell off and collected some mud in my pedals

At about 17km I let myself feel good about having stayed upright for the bike course (though I’d had a few close moments) so I took a downhill quickly to get speed for the final hill to transition. I hit the mud at the bottom of the hill, tried to turn smoothly through the corner and skidded out in a manner that would have made a cyclocross cyclist proud. It was funny and I was soon back on my feet running up the hill pushing my bike with grass sticking out of my helmet. 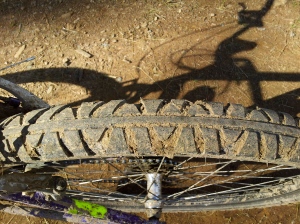 The long course race finished with one final lap of the 3km run course. My legs were hurting so I just cruised the first half of the run, negotiating the suction mud and section of creek. By the time I got to heart break hill I had caught up with two other men and found some extra power to get past them. I kept picking up my pace for the final kilometre to the finish.

The finish chute was one last tough uphill battle

I’ll share my time and placing once the results are released in the coming days. But ultimately that isn’t important. I had a fantastic time racing the Tre-X Off-Road Duathlon and highly recommend it to anyone looking for a bit of adventure.