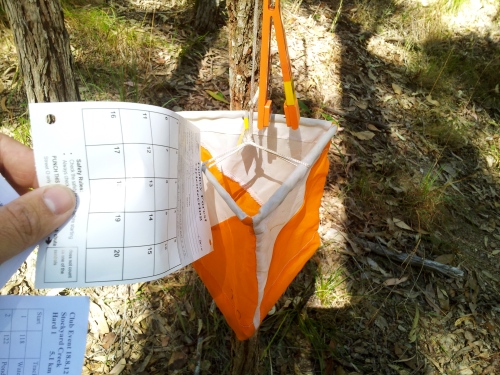 After starting my day with the club run, I went home for a few hours to relax before heading off to the Stockyard Creek Orienteer event, hosted by the Toohey Forest Orienteering club. I’ve decided to give orienteering and rogaining a go because I want to advance my navigation skills and confidence.

I arrived early for the 1pm start. After a chat with some experienced orienteers I decided to attempt the most difficult and furthest course on offer: a 5km ‘red’ course. The controls on this course were all away from the trails that criss-cross the Stockyard Creek area and they were flung all over the field of play.

I set off at 1pm to try to find my way around the eleven controls. I underestimated the challenge of orienteering a fully off-track course and had a bit of a panic on my way to the first control. While I wouldn’t have had any difficulty navigating to the location under recreational circumstances, I felt pressure under ‘race’ conditions; not because I wanted to win but because I didn’t want to make a fool of myself.

Once I relaxed and trusted my navigation skills I found the first control easily and ran cross-country through the scrub to the second control. Then I got overconfident. I checked the map but not my compass and ran off in the wrong direction. It didn’t take me long to realise my mistake but the only way to correct it was to backtrack to the second control. Then I made the mistake of not trusting my compass because I was frazzled. It probably took me twenty minutes to get from the second to third control.

Once I found the third control I regained my confidence and found the fourth and fifth controls easily before again making a mistake on my way to the sixth control. I got three-quarters of the way to the control when I made an error. Instead of trusting my compass, I made an incorrect assumption about where I thought the control would be and went off in the wrong direction. I was tired and hadn’t drunk enough water. While that’s not an excuse it does put my confusion into context. 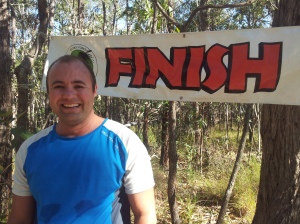 Once I found the sixth control, the final five controls fell into place easily. It took me 84:44 to complete the course, which was 60 minutes slower than the winner and 20 minutes slower than the next orienteer. But I am pretty happy with my effort. It was my first orienteer and instead of playing safe I went out on a limb by entering the most difficult event. I found all the controls, didn’t get lost and learned a lot.

Next time I enter an event, I’m going to take 5 minutes at the start to plan my routes, note the compass directions I need to take off each control, and identify attack and catching features so that I don’t have to stop and route-find as much at each control.

I can’t see myself taking up orienteering as a sport because I don’t get the same heart thumping excitement about it as I do about trail running. But it will be a good training tool to help me keep improving my off-track navigation skills and confidence. And it is a nice way to develop leg strength and concentration skills through cross-country running (which, believe me, is really tough).