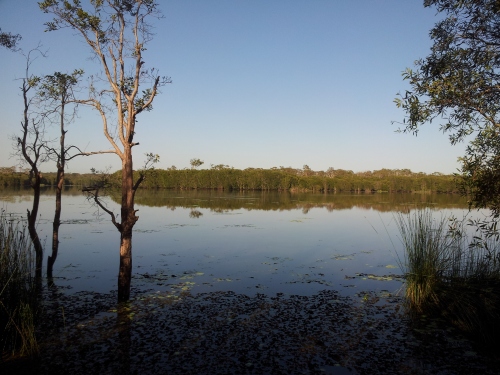 After yesterday morning’s return to training, I was excited to jump out bed to hit the trails again today (though I my exit from bed was more a slow roll because my back won’t yet allow me to jump). Instead of returning to Buhot Creek, I went instead to JC Trotter Memorial Park. This little patch of bush is near Buhot Creek where I was yesterday. I was drawn there  by three geocaches that promised easy finding and plenty of walking between each cache. And the fact that I’d never been here before. 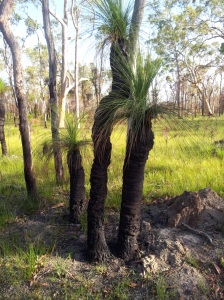 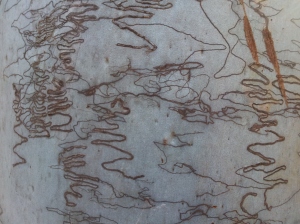 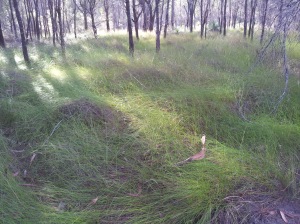 JC Trotter Memorial Park is delightful! It will be an excellent addition to my trail running when I am able to run again. But for now, it made for lovely walking. I think there’s plenty to see along the trails. There’s sculptural ancient grass trees that stand over a metre tall and look like little families. Mother Nature has written her stories on the bark of scribbly gum trees. And multiple varieties of grasses grow along the track, including some whispy long soft grasses that look like they would make a comfortable mattress. 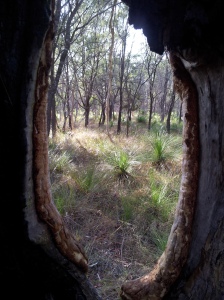 The view through the ‘window’

The geocaches I found were all large and easy to locate, unlike the challenging little micros I searched for yesterday. One was hilarious because it was a bucket with a toilet seat on top of it placed in a hollowed out tree. The tree had a ‘window’ in it, which made the cache look a bit like the small room we all have in our homes. The view through the ‘window’ was pretty and really encapsulated the atmosphere of JC Trotter Memorial Park.

I ended up walking 5.25km and felt good afterwards. I didn’t experience any pain during my walk, though I think perhaps it was slightly too far because I had some slight pain after I rode my motorbike to work (nothing like the pain I have been experiencing though). The really promising thing is that my calves and shins are still feeling great after my walks: no shin splints.

My physio is going to try to hook me up with a local guy who does chi running. I think it will be good to learn some new techniques in my quest to return to running and enjoy the sport injury-free. During my walk I tried to focus a little bit on keeping my body aligned and using gravity to my advantage. I tried taking small steps and having my feet land under me, rather than in front. It’s not a scientific approach but I’m just trying new things to see what might work.