I’m going to get my gripe out of the way right now: Somersby Store was closed today! No hamburger, chips or chocolate milk for me! In fact, I couldn’t even find a proper water tap in Somersby. To say I had a bit of a sulk is putting things mildly. But I so wanted some real food after almost six days of camp food. Not that my food or meals have been bad. But could murder some nice greasy carb-loaded, fat-filled hot chips. And don’t even get me started on a nice juicy protein-packed meat patty on a soft but lightly toasted bun topped with fresh lettuce and tomatoes, tinned beetroot and pineapple, a fried egg, slice of bacon and slightly melted cheese with bbq sauce. Mmmmm *drools like Homer Simpson*. But it was not to be today. Maybe the Yarramalong Store will be open the day after tomorrow so I can try again. I can feel that I need the extra calories. I’m not running too low but could certainly do with a top-up.

This morning it was really cold at Mooney Mooney Creek camp. I woke many times during the night trying to get warm but the cold from the ground kept finding its way through my think blue mat. I did sleep but it was disjointed due to the cold. That’s the trouble with low swampy campsites; they are cold sinks. Cold air can’t escape and then it gets compounded by the cold surrounding trapped water.

It was pretty, though, when I got up. Well, not immediately because it was still dark. But as dawn broke, I could see mist rising off the creek. The tide was in, so the water in the swamp behind the camp had risen some. This made it easier for me to collect some of the brackish but clean water to heat up for a wash. It felt good to be clean, if only for a little while.

I hit the trail around 7:30am after taking ages to get going. The late dawn in the deep valley didn’t help. Not that it really matters. There was no point rushing off because I’m on holidays.

The track along Mooney Mooney Creek was mostly flat and easy walking. There were some muddy and wet sections, but I just barged through. My Adidas Kanadia 5 Trail Runners tend to dry quickly so it’s just as easy to take the path of least resistance as to waste energy trying to stay dry. I saw another lyerbird today as I walked along the creek. Unfortunately, it didn’t turn on any crazy songs. See, lyerbirds are mimics so sometimes they treat you to some odd sounds. I’ve seen and heard one in Washpool National Park a few years ago first make a chainsaw noise and then start sounding like a car alarm. Perhaps this is yet to come later in my walk.

Mooney Mooney Creek at the crossing

The trail came to a large rock shelf on Mooney Mooney Creek up past the tidal section. Here it formed some little falls and also some pools. I had to cross the creek so had a rest before spending twenty minutes navigating the slippery channels between the exposed rocks. It might have been easy but for my packk. 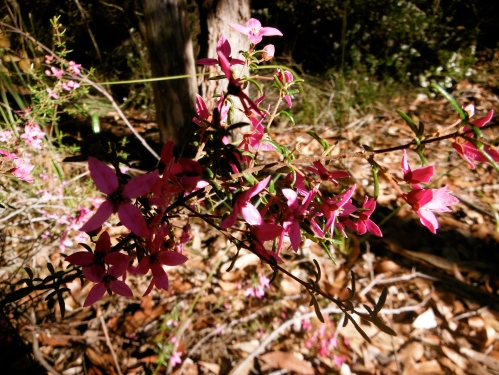 From here, the track widened to a fire trail and climbed to Lower Mooney Mooney Dam. This was build in 1938 as a water source for Gosford. It was replaced in the 1980s with a larger dam further upstream. The trail continued to climb out of the swampy valley to a dry ridge. Flowers abounded (is that even a word?) and I came to a lovely campsite where I stopped for a rest and snack.

I spent the rest of the morning hiking up to Sommersby hoping for that burger and chips. While I didn’t find the food, I did find a geocache on my way. I’d marked it on my map before I left home and would you know it, the clue gave it away so I could find it even without a GPS.

After my sulk over the store’s closure, I followed the road for ages before reaching Palm Grove Nature Reserve. But not before I had to deal with some yobbo’s dog that was free to escape it’s yard. Sorry, but dogs should not be allowed to run free even when you live in the country. This mutt snarled and blocked my path in an unfriendly way. It took some serious aggression and walking pole waving to get past. Seriously, I would have poked it one if I’d needed to. Normally, most dogs are easy to handle but this one was a right nasty thing.

Anyway, the Palm Grove walk took me from a dry ridge down a leaf-littered spur with scattered boulders. It dropped gently at first before careening down to a gorgeous little creek. On my way down I found another geocache.

The far side of the creek was pure rainforest. It was all muddy track and dense greenery like I’m use to at home. It was oddly comforting. There was even a massive small-leafed fig tee with its huge buttress roots.

Once back out of the rain forest, the bush opened back up to dry grassy eucalypt bush. Here I saw some local bushwalkers on a day walk, signed the GNW reigster and meandered down to camp. 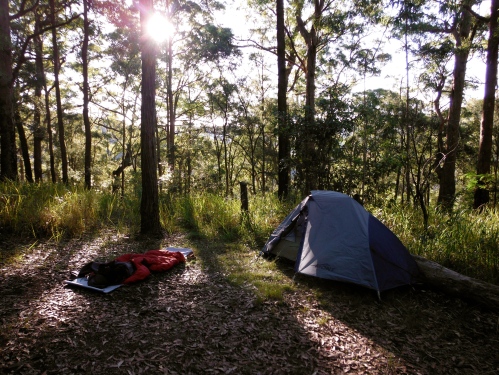 My camp tonight is on a narrow spur near the top of a low mountain. It’s much warmer up here than it was at Mooney Mooney Creek. I spent the afternoon lying outside in my sleeping bag resting and listening to the sounds of the bush. I especially liked the sound of the bell birds ringing all around. Sunset was amazing; the orange glow lingered for wages over the distant hills.

My body is a bit fatigued today. My left ankle and knee are giving me some bother and the ITB on that leg is super tight. I stretched well tonight and used a rock to do a trigger line from my glutes to my knee. I only have to travel 11km tomorrow to Archer Camp where I’m allowed to have a campfire so it’s going to be a good chance to rest my body before some big days in the Watagans. I think it’s nothing a burger and chips couldn’t fix – haha.