One final run and packet pick up

My body woke me again at 2:30am and then at 3am. But I manage to go back to sleep until just before 5am, when I decided to step outside and head off for one final pre-marathon run.

Stars shone in the sky as I ran down to Fremantle’s fishing boat harbour. The town was quiet but for cleaners and street sweepers tidying up after last night’s Friday night excesses. It’s a scene that I’ve seen repeated in cities around the world where I’ve run or walked in the early hours of Saturday mornings; something that binds us all together.

I ran to the end of the Mew Street harbour wall and found the ‘Evans Above geocache (GC2KZZV). While there, I marvelled at the expensive boats moored in the Perth Royal Yacht Club, Fremantle Annex marina under lights. I took a cute little travel bug from the geocache, which has traveled from the US through the Middle East and SubContinent; I’ll move it along throughout my travels here in Western Australia.

From Mew Street I ran to the Round House and down to the Fremantle Passenger Ferry Terminal where I found two more geocaches. My run was very light today. I just ran slowly from cache to cache, not wanting to overdo it on the day before my first marathon (and second 12-in-12 Challenge event).As I ran back down South Terrace I had a giggle at the cyclists sitting at one of the many cafes. They were all wearing their lycra outfits but had clearly not yet been out cycling because none of their bikes had lights on them (the sun was not yet up).

I have recently started eating salads for breakfast. I was inspired to try this dietary change after reading Born to Run. Despite being away on holidays, I am still eating my salads because without them I actually feel pretty ordinary. The other bonus (as mentioned in Born to Run) is that I know I am getting my five serves of vegetables a day. Today’s salad is mesculin lettuce mix, spinach, carrots, beetroot, broccoli stems, macadamias, slivered almonds and a creamy garlic dressing. 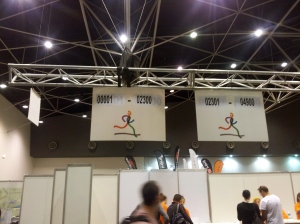 I wrote a sign for my partner to hold up

After breakfast my partner and I made our way to Perth where I am running the City to Surf Marathon tomorrow. I collected my race packet, which is just a race number and clothes transfer bag. I also picked up a sign provided by the sponsors. The sign is for my partner to hold when I run past her. I wrote my name and a silly message on it. She’ll only see me at about the 500m mark and then the finish but that’s okay. I like the sign.

Posted in 12 in 12 for 2012 Challenge, Geocaching, Marathon, Perth, Running, Training

Running for geos in Freo 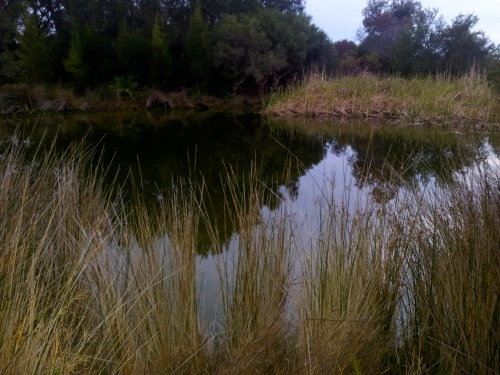 I wake up at 2:30am and then again at 3am. The time difference between Brisbane and Fremantle is only 2 hours but it’s playing havoc with my body. Not that it matters; I’m on holidays and I’m used to the East-West coast time zone shuffle. I manage to go back to sleep and wake again at a more reasonable 5am.

It’s still dark outside when I take off up the road. My ankles feel a bit sore as I run up the hill past the Fremantle Hospital. I’m sure it’s just the cold air and I know from experience that they will feel fine within a kilometre or two. I also know that they only hurt because they are too tight and that my physio is working on fixing that.

I navigate my way uphill to the Old Freo Steamer geocache (GC22YJ2). The old steamer’s silhouette is clearly visible in the distance as I run down the hill in the dark blue morning darkness that is shrouding the world in the quarter hour before the sun’s rays start to crack the horizon. Unfortunately, I don’t find the cache. It’s partly the darkness but more because all the workmen are arriving at the nearby factories and I’m concerned not to give the GeoGame away. So I simply set back off up the road.

By the time I reach the Fremantle Golf Course just a block away I can see a line of red sunlight breaking the horizon between the land and sky. It’s incredibly beautiful despite my urban industrial setting. I run along the road with the golf course on my left and industry on my right. A pathway leads into the Booyeemburra Park where the Freo Frolic (GCJQY1) geocache is hidden. The park is planted with native trees, shrubs and grasses, and contains a few ponds. I follow the pathway around a pond towards the GZ (coordinates where the geocache is hidden).

After a short hunt I find the cache, which contained a cute Squelch the Platypus Travel Bug (a TB is a tagged item that move from cache to cache around the world). Squelch’s was released in the US. His goal was to travel the rivers and lakes of the US before returning to Australia to explore lakes and rivers here. He’s ultimate goal is to travel to Darwin to be reunited with friends there. I will take Squelch on our holiday and hopefully will find a good cache to place him in.

Buoyed by my find at Freo Frolic I ran up to busy Carrington Street. This long major thoroughfare is undulating. It’s not terribly inspiring but I enjoyed the run through ‘everyday Fre-O’, rather than only sticking to the tourist areas. I took in the sights and scents of the well-established front gardens that many houses here have. They are different to our gardens in Brisbane because Fremantle gardeners are cursed with dry sandy soil I am cursed with heavy wet clay.

Up in Hilton Park I failed to find Hilton Park Green (GC21CMQ) and the nearby Freo Wrestling Rocks (GC367WE). I had a good search for the former and only a perfunctory look for the latter. As frustrating as DNFs are, I still enjoyed the run to get here. 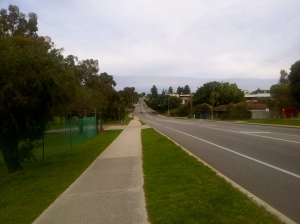 From Hilton Park I followed Lefroy Road all the way back down to South Terrace. When I say ‘down’, I mean that I traveled south. Like the rest of my run, Lefroy Road was undulating, with a long climb in the middle section. But the good thing was that the climb gave me a lovely view over Fremantle.

I found the Bookworm geocache (GC28HGT) easily when I reached South Terrace. It was well hidden and would be impossible to find when it’s busy because you almost can’t be stealth. But I got lucky; a delivery van was parked in front of the cache so was blocking me from the people having coffee across the road. The cache had a cute chicken pen in it, which is the cutest cache pen I have found. I used it to sign the log and ran back to the B&B where we’re staying.

I felt comfortable during the entire run so was surprised to find that I had run 9.5km at 5:15 pace (excluding stopping to search for geocaches) on such a hilly course. It bodes well for the City to Surf Marathon, which I will be running the day after tomorrow.

Rest day on the West Coast

I’m over in Fremantle in Western Australia. My partner and I arrived at 1am WST, which was 3am in our regular time zone on the east coast.

We are staying at a brilliant B&B apartment where we can relax and unwind from normal life. While I had intended to run 6km today, I slept in, went on a tour of the tunnels under the historic Fremantle Prison and found a geocache at the War Memorial.

I skipped the run in favour of spending time with my partner and resting after what was a 22 hour day yesterday.

Tomorrow I will take a 6km morning run and geohunt, which I will share. But today is a rest day with my partner and I feel a bit lazy 🙂 .