I took the train to Nowra yesterday to visit a friend. We had a “gezelig” (a Dutch word for which there is no appropriate translation but sociable and delightful will have to do) night talking around the dinner table and outside in the courtyard.

This morning I woke early and went for a short 20minute stroll to find a nearby geocache where I dropped off a geocoin and collected another geocoin. The area my friend lives in is built up and suburban so there wasn’t much to photograph. Though the gardens of blossoming flowers did smell divine.

Tinnies on the shore

I spent the day with my friend who took me to see the local sight. We walked along the river and out to the lighthouse. I didn’t pay attention to the place names because we were too busy talking.

After exploring the coast we drove to nearby Berry for lunch. This pretty town has a hippy feel to it and wisteria growing with gay abandon. We don’t get wisteria at home so I felt like I was in another country.

After lunch I caught the train back to Sydney. A journey that took about 3 hours but took me through beautiful country from emerald green fields to the sapphire blue ocean. 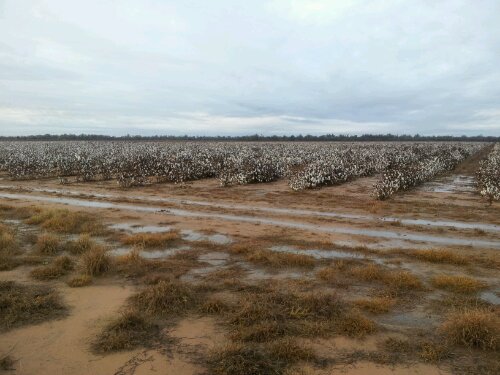 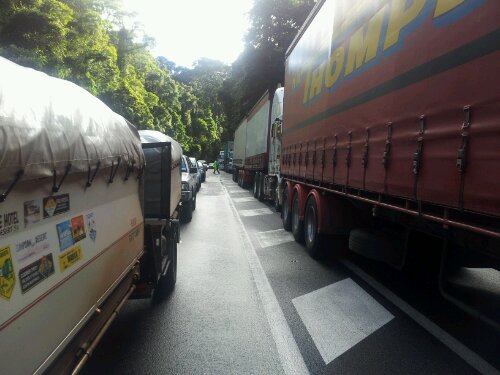 I feel I should start this post with “Forgive me reader for I have sinned. It’s been two days since the events in this post took place and I’ve not made time to blog”. But I’m still going to write it as though it was that afternoon because it’s easier for me that way.

We left Collarenebri before breakfast because we had decided just to drive home today. The rain was still falling steadily so there was not much point delaying the 700km trip home. We wouldn’t be able to camp anywhere due to the ground being too boggy and country pubs really aren’t something you go out of your way to stay in. Sure, they are comfortable enough but they aren’t exactly a resort. The  early morning fog made the outback feel oddly moorish and, therefore, for me, British. Quite appropriate given that the Queen’s Jubilee celebrations were taking place in the UK (for those not familiar with Australia’s constitutional monarchy – the Queen of England is also the Queen of Australia).

For the first few hours we traveled through cotton country. Most of the fields had been harvested but the rain must have come too soon for some farmers so there were still some fields of white fluffy cotton hanging on prickly bushes waiting to be harvested. Cotton is one of those deceptive crops: it looks pretty but is quite destructive to the soil and environment. We pondered this for a while and ultimately decided it’s probably better to have cotton farms than to rely on plastics factories to create the same types of products. Such is the conversation when driving all day long through the rain. There’s no solving the world’s problems going on; we just mulled over the scenery and past holidays during which we’d traveled through similar country.

Most of the day passed without incident. We made good time traveling the outback roads through Moree, Goondiwindi and Warwick. Dad again indulged my desire to find geocaches; something that was becoming simpler now that I have downloaded the free C:Geo app onto my android phone. The app allows me to both locate and navigate to geocaches by using my mobile internet and GPS. I enjoyed some successful geohunts despite the rain.

Then, at the top of Cunningham’s Gap, our quick and easy run came to an abrupt end. A truck hauling a massive piece of mining equipment had broken down on the range and was blocking the road. The truck’s load reportedly weighed 80 tonnes and was 9 metres wide. Three huge tow trucks were attached to the uphill side (back) of the truck to stop it slipping down the mountain while another tow truck was attached to the front. The tow trucks weren’t small either; you can see two of them in the third last photo above. Cunningham’s Gap is a major truck route connecting Brisbane to the other Australian capitals and the southern major cities so having it closed caused a long line of trucks to be backed up in either direction. Fortunately, the police were able to escort cars through a narrow gap between the broken down truck and the edge of the road so we were able to go through after a relatively short half-hour delay. However, the Gap was closed to trucks for about 9 hours; that’s a major inconvenience given that it takes truck drivers only about 11-12 hours to drive from Brisbane to Sydney so many truck drivers would now be a full day behind schedule. For us, though, it was an impressive final hour of our whirlwind trip.

Cunningham’s Gap marks the entry to the coast country. It’s one of two places west of Brisbane where we can cross the Great Dividing Range that separates the bush from Brisbane and the Gold Coast. The views from the range are the last chance to really enjoy stunning scenery before we hit the Ipswich and the long final push through built-up suburbs. And it therefore represents the end of our long drive. Dad had driven 4,100km in six days. I had been with him for 3,050 km in four days. I am glad I went along for the ride because I had a grand time. 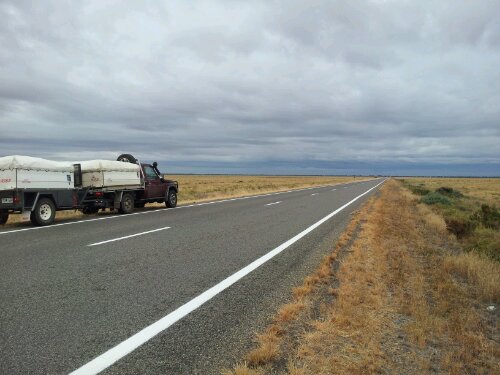 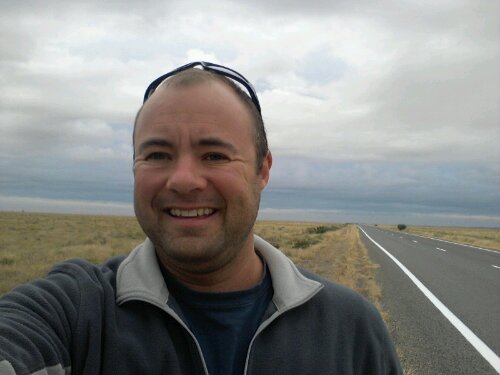 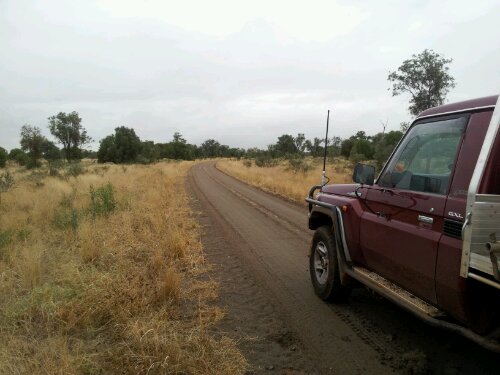 Well, the rain thwarted us again today. It’s great for the farmers but not so good for us travelers hoping to get off the major highways.

With the Silver City Hwy closed due to rain, Dad and I had no choice but to retrace our steps back down the Barrier Hwy. But all was not lost; the Outback never looks the same twice and the same country looks different depending on whether you travel west or east.

And so it was that we drove across the flat plains, over the small hills and past the salt bush. The rain started to fall around 9am and we could feel the flora sigh with pleasure. The dust washed off the salt bush and grass, intensifying their colours, and we could almost see the leaves uncurling to drink in the precious droplets.

We stopped for breakfast at the Little Topar Hotel. The bacon was plentiful and the sunny side up eggs perfectly cooked. There is no town, just an isolated 90-odd year old hotel that seems to be a major truck stop.

The 540km from Little Topar and Nyngan were uneventful. The rain fell steadily and the landscape closed in as more trees grew along the roadside. We saw some emus, kangaroos, feral goats and livestock.

Then things got interesting.

We decided to cut through from Nyngan to Walgett. The road was open. A lengthy stretch was gravel and clay. It was beautiful, slippery and slow. We engaged 4 WD and took our time as mud spun up from the wheels and spattered all over the vehicle, including the windscreen .

We ran out of daylight just as we hit the narrow bitumen Warren-Carinda road. With the help of our spotlights, we made good time, and spotted some huge wild pigs and roos.

The Carinda-Walgett road is now sealed, wide and in good condition so it was easy to cover what we thought would be the final 70km of the day. Unfortunately, when we got to Walgett we discovered a town where every building entry was covered with metal bars. There were a lot of heavily intoxicated people on the street and the smell of fear in the air. We stopped at one of the three motels in town to ask about accommodation and I think we were both relieved to hear there was nothing available at all in town.

So we drove another 75km to Collsrenebri, which has a pub with accomodation. We arrived a Collie just as the cook closed the kitchen but she still cooked us up a huge plate of chicken schnitzel, vegetables, chips and gravy as we settled in for a beer before retiring to our simple yet acceptable room.

I have to give a special thanks to my friend L who phoned us in Nyngan to give us some local knowledge and directions given she used to live out here. It was both helpful and thoughtful. 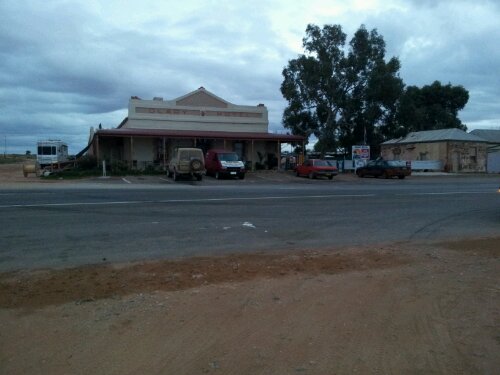 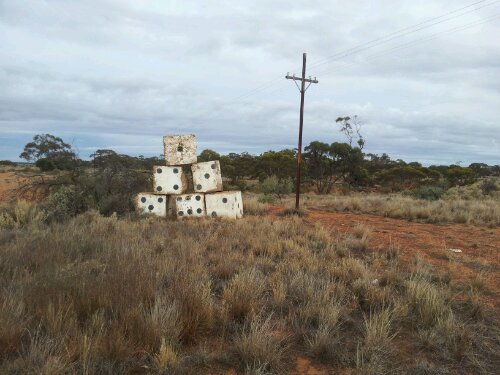 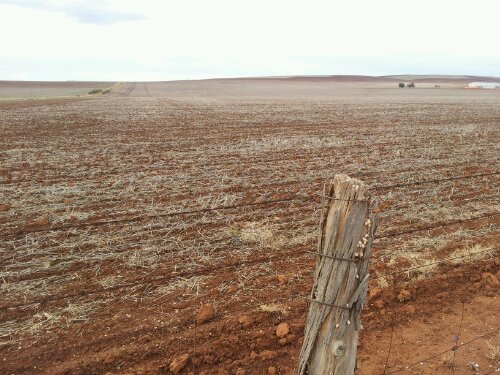 We set off from the Best Western motel, Broken Hill at 5:30am. We returned exactly 12 hours later after driving 800km.

It wasn’t meant to be an out-and-back trip. We had to drive to Crystal Brook, 400km away near Port Pirie to pick up a camper trailer. Then we were going to drive north through the South Australian Outback to Innamincka. However, while the road had been open two days ago, 30mm of rain yesterday resulted in a total road closure today. We had no choice but road backtrack the 400km to Broken Hill. Such is Outback travel.

Our drive was still glorious. We drove through tiny towns with little more than a pub and picnic area, barren rolling hills and flat channel country. We crosses dry river beds coloured bright red from the dust that has long replaced the water. The rivers will run again when the water from the rains up north make their way south.

Down around Crystal Brook we entered farming country again. The fields have been harvested, leaving us enjoying the sight of furrowed red-brown paddocks contrasted against the unarmed yellow-green hills. I pre that there’s such colour contrast in the land. It makes me feel alive.

Rain clouds followed us all day. The steel grey skies creating a blue filter for for the sun’s rays. It brought out the contrasting red soil more strongly than the yellow light of a sunny day would. Given that I love red soil, this was fantastic.

Dad again indulged my desire to geocache today. We found four caches, including one near some pretty cool dice. They are just blockage that someone has graffitied. I like this kind of humorous fun.

We had a successful day picking up the camper trailer and both enjoyed the Outback scenery along the way. Soon we will go to the pub where we ate delicious, perfectly cooked steaks last night. They were huge and tender (and only $12 including salad, chips and sauce).