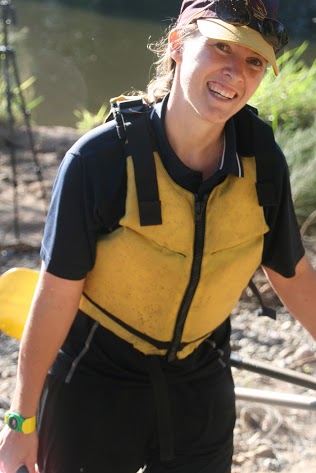 As I sit here on Monday morning, it’s difficult to know how to start writing about the fantastic weekend my team mate and I had at the Rogue 24hr Adventuregaine. If all anyone looked at was the points on the scoreboard, they might think that Whoops Witch Way had a shocking race, scoring just 1670 out of a possible 3370 points, making us 34th of 45 teams or 14th out of 17 mixed teams. But scoreboards sometimes do lie. Both members of Whoops Witch Way agree that the Rogue 24hr Adventuregaine was one of the most fantastic weekends either of us have ever had.

At midday Saturday, we set off on the first of four stages: a 20km kayak down Yabba Creek. As with all rogaining events, all checkpoints are optional and teams may complete them in any order within a given stage. We had established a game plan intended to ensure we had an enjoyable and physically challenging weekend while also building our confidence for future rogaining events (this was only our second rogaine). So, instead of running off to CP1 with the other teams, we walked down to the kayak transition and set off on the water.

Yabbe Creek contained just enough water for us to paddle. The lowest recommended depth for paddling the creek is when 6cm water flows over the dam wall; we had 7cm. This meant we had a few little portages and sections where we had to get out so that the kayak could float over shallow sections of the creek. Though the lack of water also meant we could limbo our way under some of the bridges and fallen trees that crossed over the creek. There were even some small shallow and simple rapids for us to negotiate on our way downstream to add a bit of spice to the day.

Our tactic to skip the first checkpoint meant that we had the creek to ourselves for most of the stage. We saw the lead teams twice as they passed us in the first half of the stage and then again after they stopped to do the optional foot rogaine mid-stage. Both teams were friendly and didn’t complain when they got stuck behind us in narrow sections of the creek. Team Spin City Cycles even gave us a few tips to help us improve our paddling efficiency as they raced past us. 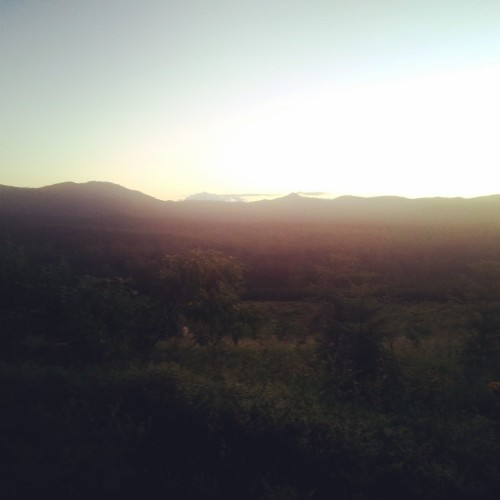 Our transition between stages 1 and 2 was slow and deliberate. We dried off with a towel, changed into dry clothing, laid out a picnic blanket and made chicken wraps, which we sat down to eat. All around us, teams were moving quickly to cram food into their systems and refill their hydro packs. It was amazing to be sitting there amidst some of adventure racing and rogaining’s elite teams to see how different their approach is to our’s. One by one, each of the teams disappeared into the distance, taking the northern route option out into the forest. About half an hour after we arrived, we too were ready to set off in the opposite direction.

We decided to focus our mountain bike leg on accuracy, rather than distance. We selected a 40km route that took us through some of the less hilly terrain. This was all part of our game plan to select a route suitable to our abilities that would allow us to really enjoy the weekend. We started the ride in daylight, enjoying some quiet forestry roads that ran along a bubbling creek. As the sun started to set, we came upon CP19, one of the most stunning points on the course. There was no way I was letting the moment pass without stopping to take some photos of the view and an obligatory selfie of our smiling faces.

As day turned to night, we cruised around the course collecting all the checkpoints we had marked up on the map. We only saw a handful of other teams as they either rode towards us or were stopped filling bottles at the water station. We even took time to stop and attach multicoloured glow sticks to ourselves and our bikes; such were our spirits.

We were the first team to arrive at Race HQ after stage 2, not because we were fastest but probably because we rode the shortest distance. The lovely Gary and Kim (from Team Mountain Designs who won the 8-hour race), and their friends came over to HQ to share a laugh with us. It sounded like they’d had a magnificent day on the 8-hour course and an enjoyable evening around the campfire. Their tips and encouragement were greatly appreciated as we prepared to head off onto Stage 3, a night navigation trek course that would prove to be a challenge.

Stage 3 was not our most productive in terms of  points. We spent three hours trekking and only found two of the four checkpoints we attempted. However, with a near-full moon, cloudless skies and only the two lead teams out on the course with us, the late night trek was stunning. After wasting an hour desperately trying to find CP34, only to learn later that we had walked straight past it, we turned off our headlamps and trotted off down the gravel road. As we ran/walked our way along the road, we watched the lead teams’ head torches climb up and back down a mountain to CP33. It made us glad we hadn’t decided to head out for it because they had to go a long way uphill. We found the easy win at CP28 and then another easy find at CP32 along a fenceline before spending about an hour trudging around looking for the 100 pointer at CP31. We have learned that we were again mere metres from our goal. Had we stuck to our game plan we might just have found it but we made the tactical error of believing we were in the wrong place because one of the top two teams (who cleared the course) were somewhere different to us.

While we didn’t score many points in Stage 3, it did serve as a reminder for us to race our own race and ignore everyone else on the course, no matter how good they are.

We returned to Race HQ around 1am and decided to punch in, ending all thoughts we might have of returning to the stage 3 trek leg. With kayaks for the final stage being unavailable until 5am, we decided to hit the hay. My team mate did a fantastic job setting up camp so that we could both crash out for a solid three hour slumber.

At 4am we woke and prepared ourselves for the final stage: a kayak with optional trek legs around Booroomba Dam. The sleep was just what we needed to refresh our bodies and spirits, ready for a long paddle in perfect conditions.

Paddling out of the mist from CP45 (Stage 4)

We were one of four teams to launch their boats at 5:30am. With the lead teams taking off in opposite directions around the course, we were soon paddling alone enjoying the misty pre-dawn light. Visibility was limited as the mist hung thick in the air. For most of the first hour, the only colour in our world was the bright red boat, yellow PFDs, and orange and white checkpoint markers.

The dam was populated by armies of dead trees, standing eerily in the water watching silently. It wasn’t until we saw them that we realised why CP49 was a 100-pointer. The clue ‘on dead tree’ but the CP was hidden amongst hundreds such trees standing in a large clump. As we came out of the inlet from CP45, we could just make out the shape of a team paddling amongst the dead trees some distance away. We couldn’t tell whether or not they had found the CP, but we decided to head in that general direction to check things out. The other team left the area quickly without us being able to tell where they’d stopped. But between our angle or approach and the first rays of sunlight, we were lucky enough to spot the bright orange marker in the distance and made a beeline for it. A random kayaker we saw paddling around turned out to be one of the race directors who snapped a photo of us celebrating our successful find.

As the sun rose, the day just got even more beautiful. The black water reflected the shoreline and sky, as bright blue kingfishers flitted around looking for breakfast.

We found all the kayak checkpoints in stage 4 but opted not to attempt the trekking CPs because we wanted to remember the race for the successes and joys, rather than risking frustration.

We had such a fun time on the race

There will be other races in which Whoops Witch Way race for the purpose of finishing as high on the scoreboard as we possibly can. But sometimes, you just have to go out to have fun. The Rogue 24hr Adventuregaine tested our physical endurance and was a huge confidence-builder in our first full season together as a team. We’ve never attempted such a long event and discovered that, with a few hours sleep, we can keep it together and keep our heads. All going well, you’ll see team Whoops Witch Way at the start line for the 2014 Rogue 24hour Adventuregaine. And, who knows, we might just have a little more experience, confidence and skills by then so that we can race a little further while still just having fun.

I leave tonight to travel to race HQ for the Rogue 24hr Adventuregaine. We have bike drop at 8:30pm, receive our maps from 10am and start racing at midday.

If you want to follow my team’s progress in the race, we are Whoops Witch Way (Race #1) and you can keep up-to-date over the weekend here.