Our final morning was gorgeous.

Whitsunday Blue had a stand-up paddleboard onboard so I took it for a spin around the inlet. I’ve never used a SUP before but conditions were perfect and I managed to explore the inlet comfortably for about an hour. I even saw a blue-spotted lagoon ray as it glided gracefully through the water.

And then, as quickly as it started our glorious trip was over. All that’s left now is a short flight home later this afternoon.

Our second morning on Whitsunday Blue was magnificent. I woke with the dawn and watched to sun rise over Hook Island. 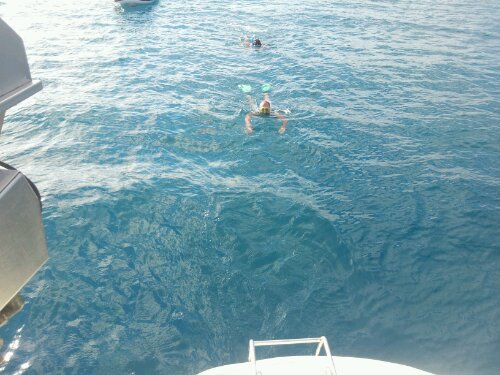 It was just past 6am when Mum and I jumped off the back of the boat t swim with the bat fish. These big fish were as curious about us as we were about them. They swam with us, coming within centimeters of our faces and hands.

After a fantastic breakfast of pancakes, croissants and fresh fruit we boarded the tender to the Langford Island sandbank. Here we donned wetsuits, flippers, masks and snorkels.

The snorkeling here was brilliant. We swam with a turtle and lots of brightly coloured fish.

The coral was like a colourful garden. It included soft corals that moved with the current, hard coral that looked like brains, coral flowers and small tree-like coral growing on short stumps. The coral was multicoloured varying from blues, purples and greens to pinks, oranges and yellows. 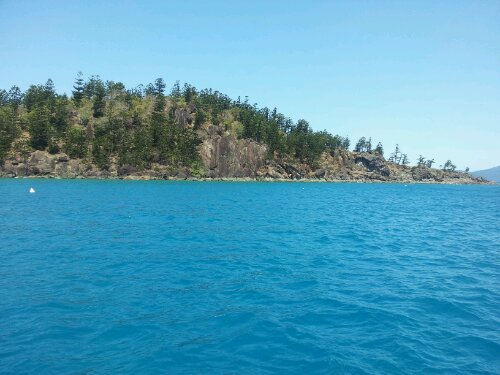 We hoisted sails and cruised to False Nara where we snorkeled around the bommies. The water was deep and slightly choppy. Unfortunately visibility wasn’t great; the water was a bit cloudy. But it was still great to be in the water. We saw some great cauliflower shaped corals in pink and yellow, as well as big brains.

We spent the afternoon making the most of the catermeran’s huge sails and the strong north-easterly breeze. We sailed straight down the Whitsunday Passage back to Gulnare Inlet for our final night.

After boarding the sailing catermeran at Hamilton Island late yesterday afternoon, we motored across to Gulnair Inlet. We spent the night here talking and eating while the full moon rose over Whitsunday Island.

Nights on the water are so quiet. The inlet is sheltered from the light breezes and we’ve chartered the entire vessel to ourselves. It was a wonderful opportunity for our family to catch up and reminise about all the sailing trips we used to take.

This morning I woke early. Red breasted finch-like birds sat not more than a metre from me on the yacht’s rails. A school or fish flapped about on the surface while opportunistic seaguls feasted on them.

A small part of Whitehaven Beach

After swimming a few hundred metres around a boat

After breakfast we sailed around the southern end of Whitsunday Island to Whitehaven Beach. This long white strip of sand is an iconic landmark; frequently included in post cards and calendars of Queensland.

We were dropped at the beach in the yacht’s tender because the anchor was broken so we couldn’t anchor close enough to swim for shore. Once there we picked another yacht about 150m offshore and swam around it. Our family holiday wouldn’t be complete without such a challenge. 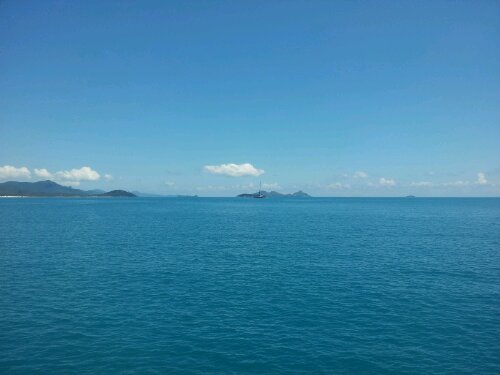 Border Island in the distance

After our swim we reboarded the yacht and set off for Cateran Bay on the north side of Border Island, passing massive turtles along the way. 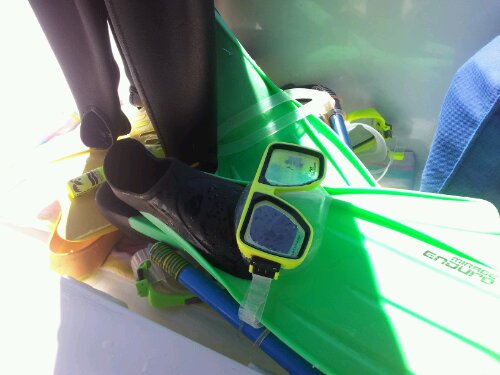 Cateran Bay on Border Island is one of Mum’s favourite Whitsunday destination. It’s an isolated bay on the far east of the Whitsundays. It used to have great snorkeling but storms in recent years have led to coral death.

We still enjoyed an hour snorkeling in the bay. We say blue, yellow, pink and orange coral, and coloured fish. I pulled my partner around on a pool noodle so she could enjoy the experience without worrying about her swimming ability. 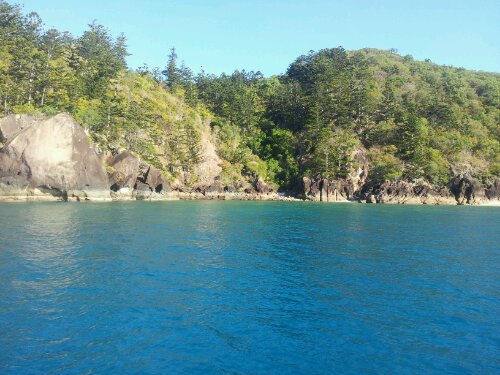 But most impressively, we saw two huge male hump-headed maori wrasse and a massive trevally. It truly was a magical experience.

We ended the day with drinks watching the sunset off Langford Island. It was a brilliant day!

We’re finally here at the superlative Whitsunday Islands. It’s my second trip here since April and I’m looking forward to the next three days of sailing and snorkeling (and a secret plan to do some geocaching).

This morning my partner, parents, sisters, brother-in-law and I flew from Brisbane to Hamilton Island. The flight was just 1:30 and it was pretty. My partner and I sat on the eastern side of the plane enjoying island and reef views.

The airport at Hamilton Island is wedged between the ocean and a hill. I don’t think I’ve ever landed anywhere so pretty. 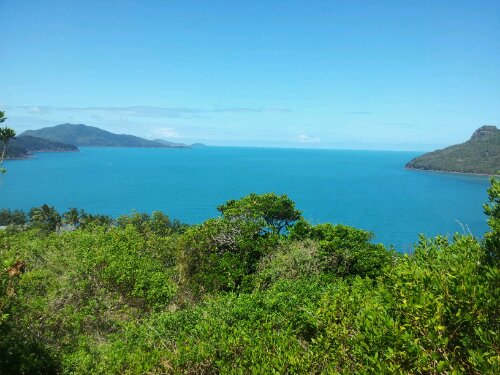 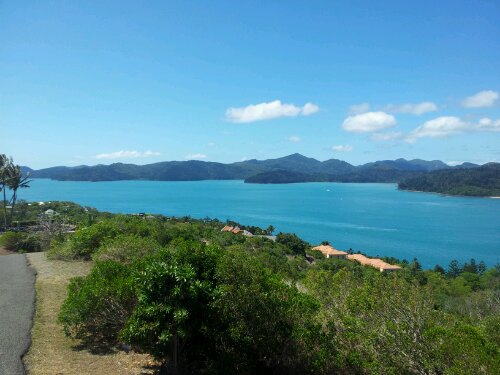 After lunch I climbed up the steep roads to a lookout above the main street. I was drawn there by a geocache (yes, I am a bit obsessed).  My trek was rewarded with amazing views of the north eastern side of the island and channels.

We are now waiting for the yacht to arrive and whisk us away. I don’t know how much internet service I’ll have in the coming days but I’ll have plenty of time to write and take photos to upload when I can. 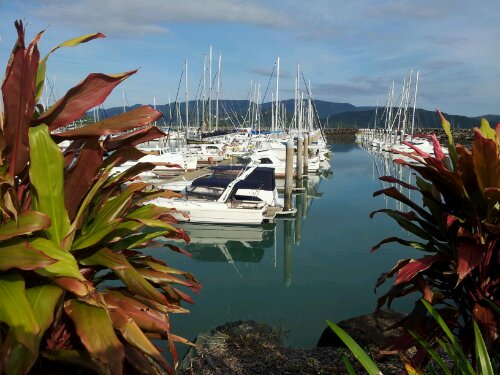 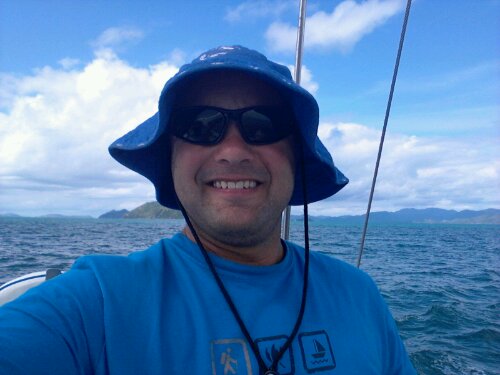 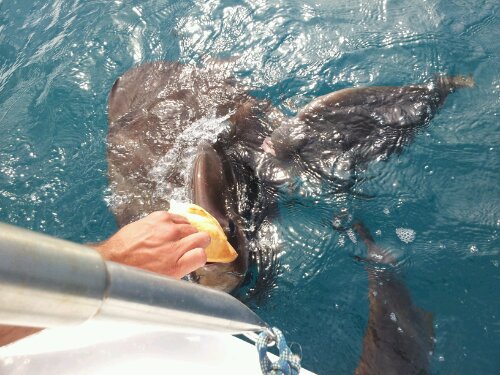 We took a sailing and snorkeling tour from Able Point Marina to Black Island in the Whitsundays on the SV Domino. From the moment we were welcomed aboard by Skipper Reg I knew today would be special.

Our vessel for the day was the 36 foot Sailing Vessel Domino; a sturdy and comfortable yacht. Skipper Reg was a friendly and experienced sailor who has a great way with his guests. An added bonus for us is that Reg speaks Dutch so he could chat with my grandmother who is here with us visiting from Holland. They shared stories of days gone by in Indonesia, Holland and PNG. It was a delight to listen and to continue practicing my Dutch. Our fellow guests were a German couple about my own age.

After motoring briefly out of the marina we hoisted sail and let the wind take us to Black Island (aka Bali Hai). The sailing was magnificent and relaxed. It took me back to my childhood years sailing Moreton Bay, the Sandy Strait and the Whitsundays. The memories reminded me about happy times past and my roots as an outdoor man.

The Whitsunday seas are the most wonderful blue green. They are crystal clear and warm. You have to see them to believe them.

At Black Island we were taken to shore in a tender and set up at some picnic tables. Reg hung a tarp for shade and we got our snorkeling gear on.

It’s such a privilege to be able to explore the colourful world below the water. All the colours of the rainbow greeted us down there. I saw colourful coral, brightly coloured tropical fish and turtles. I spent almost 1.5hours drifting along immersed in the foreign world of the sea.

After our snorkle we were treated to a tasty lunch at the picnic tables. We ate prawns, salmon, fresh fancy bread rolls and a salad of fresh produce.

Our 2.5 hours at the island ended and we returned to the SV Domino. Out at the yacht we were treated to the sight of huge batfish swimming around near the surface before we hoisted sail to return to Able Point Marina.

On the sail home I dangled my feet in the water and decided to take sailing lessons to relearn the skills I had as a child. Who knows, I might even save up for a small boat to sail out on Moreton Bay. I do love the power of the wind and the quiet of a day out sailing . 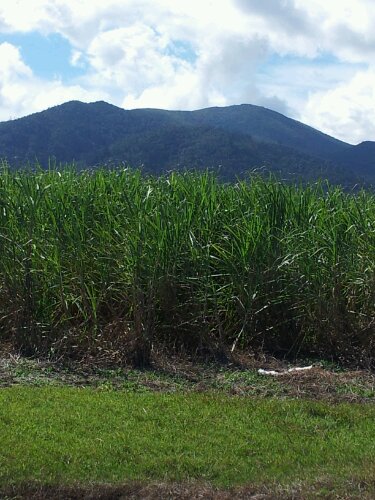 After our late night playing cards we slept in and left camp late this morning. We didn’t hit the highway until well after 10am.

Our first stop was a scenic lookout high up on a hill. We could see all the way to the coast to the east, mountains to the southwest and sugar cane fields to the north.

An hour later found us sitting in a backside park in Bowen eating morning tea and enjoying the view over clear blue waters. I also stopped to take a photo of the giant Bowen mango. That’s what Bowen is famous for: delicious sweet Bowen mangos. This is one of the favourite eating varieties in Queensland.

While we were in Bowen we decided to change our plans. We had been aiming to drive to Eungella National Park but, given the late start, we decided instead to stop at Airlie Beach just 100km away.

When I ride down to the water in Airlie Beach I am glad Mum suggested this stop. The water sparkles and shimmers to a backdrop of coastal heads and the Whitsunday Islands. We pitch our tents at the backpacker hostel and camp ground in the town centre and head into town to book a snorkeling tour for tomorrow.

Airlie Beach seems to be a real backpacker town. Everything is geared to their money. Tours depart to the Whitsundays everyday. You don’t have to pre-book; just turn up and book something for the next day. Young tourists abound and most of the shops seem to be staffed with foreign-accented 20-somethings.

After dinner we walk along the lovely man-made lagoon, feeling the fresh ocean air cool the hot humidity slightly. Our stomachs full from eating dinner at a local restaurant we all head to our sleeping bags early; ready for tomorrow’s sailing and snorkeling adventure.